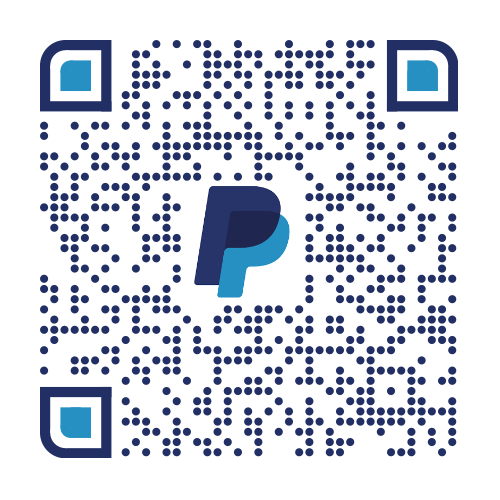 PRAYER FOR THOSE PERSECUTED IN IRAQ & Syria
O God of all the Nations,
the One God who is and was and always will be, who in your providence willed that your Church be united to the suffering of your Son, look with mercy on your servants in Iraq who are persecuted for their faith in you.
Grant them perseverance and courage to be worthy imitators of Christ.
Bring your wisdom upon leaders of nations to work
​for peace among all peoples.
May your Spirit open conversion for those who contradict
your will that we live in harmony.
And in all things may we be united in truth and freedom to seek your will in our lives.
​We ask this through Christ our Lord. AMEN.
Our Lady, Queen of Peace,
Pray for us. 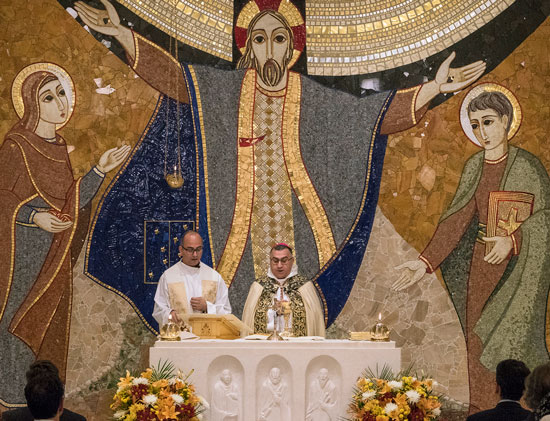 Christians in the Middle East have demonstrated that they love God more than their possessions, their homes and even their families by refusing to denounce their faith, Archbishop Bashar Matti Warda of Erbil, Iraq, said in his homily during a Nov. 28 Memorial Mass.
The Mass was celebrated at the Saint John Paul II National Shrine in Washington, D.C., in memory of the victims of ISIS’ genocide. Held during the Week of Awareness for Persecuted Christians, the Mass was co-sponsored by the U.S. Conference of Catholic Bishops, the Knights of Columbus and other Catholic groups. Archbishop Warda was the principal celebrant of the Mass. He was joined by Father Salar Kajo, a parish priest in Teleskof, a town in the Nineveh region of Iraq recently liberated from ISIS’ control.
The persecuted Christians in the Middle East have “suffered at the hands of ISIS because they love God with their whole mind, their whole soul and their whole heart,” said Archbishop Warda. He added that despite the threat of being forced to leave their homes or even losing their lives, they refused to give up the Christian faith.
“They could have kept it all if they simply denounced their faith, but they did not do that,” he said. “They chose Christ.”
On the other side of the world, Christians have shown support of these suffering men, women and children. Such support demonstrates what it means to truly love your neighbor, the archbishop added.
“The love of neighbor in this case is particularly meaningful,” he said. “Those helping from the West will likely never know the person, but they help anyway. ... It shows everyone we are protectors of our brother no matter who he is.”
Since ISIS invaded northern Iraq in 2014, Archbishop Warda has cared for Christians in the country, the majority of whom fled their homes and escaped to Erbil. Now, Church leaders in Erbil are helping many of them return to their homes.
During his homily, the archbishop shared that many people ask him if there are any blessings in being persecuted. The answer, he said, is “yes.”
“God shows his love and care by the solidarity being shown by people outside,” he said. “The will of God is helping his people, helping the needy, being near the poor and persecuted.”
The blessing of persecution, the archbishop said, is that “we learn how to give and how to receive with love.”
Kelly Sankowski, a reporter at the Catholic Standard, contributed to this story. 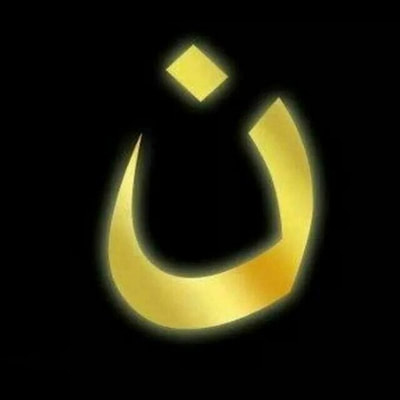 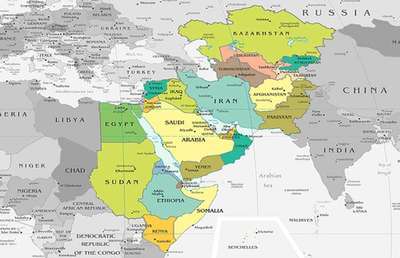 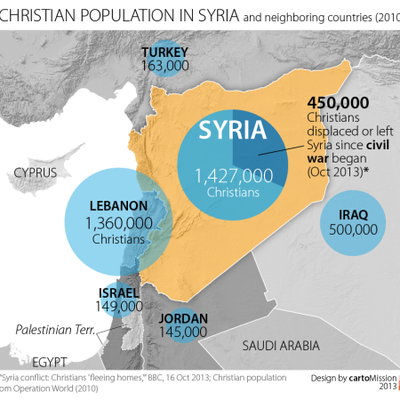 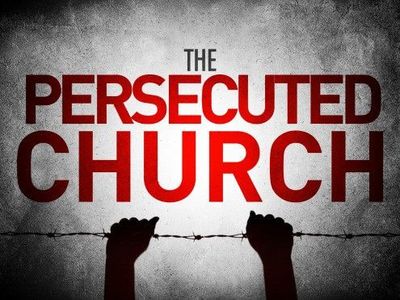 ‘CONVINCED OF GOD’S LOVE AND POWER
IN ANNUAL REPORT, SUPREME KNIGHT ANNOUNCES INITIATIVE TO REBUILD IRAQ TOWN. 8/1/2017  courtesy of www.kofc.org
In his annual address delivered at the 135th Supreme Convention in St. Louis, Supreme Knight Carl Anderson announced a new initiative to rebuild a town in Iraq destroyed by ISIS.
The new initiative is part of the Order's continuing efforts to help Christians and other minorities who have suffered genocide in the Middle East.
The supreme knight also cited the major accomplishments of the Knights of Columbus, such as the Order’s record levels of charity, with over $177 million in donations and over 75 million hours of volunteer service, growth in membership, and the continued strength of the insurance.
At the opening of his report, the supreme knight officially announced the convention’s theme.
“This year marks our 135th anniversary. We celebrate our anniversary in a city named for a great and saintly Catholic king, a city of missionaries, and a gateway city opening up the promise of a new continent. And, like those early missionaries, we come to St. Louis because, in the words of this year’s convention theme, 'We are convinced of God’s love and power.'"
The supreme knight spoke to an audience of distinguished guests, members of religious communities, and approximately 2,000 Knights and their families from throughout North and Central America, the Caribbean, Africa, Asia and Europe.
“No other Catholic organization offers men what we do,” Supreme Knight Anderson said. “We help a man to protect his family with our exclusive, top-rated insurance. We help a man to bolster his faith and strengthen his family through our Domestic Church program. And we offer him the opportunity to live out his faith through charity — as part of a brotherhood of Catholic men. We have done this for 135 years, and today we continue to do this in even greater ways. For 45 years, membership in the Knights of Columbus has grown. We now stand at the all-time high of 1,941,728 members.”
In founding the Knights of Columbus, Father Michael McGivney sought to respond to the difficulties affecting Catholic families in 19th-century America and strengthen his parishioners’ faith and their lives as Catholics, the supreme knight said. Knights continue Father McGivney’s work when they “support families in their vocation to holiness through the Building the Domestic Church While Strengthening Our Parish initiative.”
Along with growth in membership and charity, the Knights of Columbus achieved records in its insurance program.
“Last year, we achieved our 16th consecutive year of growth in insurance sales with a new record: $8.54 billion, in new life insurance. The Knights of Columbus now has more than $105 billion of life insurance in force – a $50 billion increase in the last decade — and a 4.4 percent increase over last year,” the supreme knight said. “These impressive sales numbers — and the overall success of our insurance program, is due in large measure to the commitment of our more than 1,500 agents. Our agents are all brother Knights who are dedicated to the principles of the Order — and to serving our families.”
​The Knights of Columbus Investment Department also saw a successful year, especially in the Knights of Columbus Asset Advisors, which in its nearly two years of operation has 137 clients, including 14 dioceses. “In this way, we can help other Catholic organizations put their money to work in ways consistent with Catholic principles.”
He added that for the for the fourth year the Knights of Columbus was named a World’s Most Ethical Company® by the Ethisphere Institute.
One of the Knights of Columbus’ greatest endeavors during the past fraternal year was the assistance it brought to Christians facing persecution, especially those facing genocide in the Middle East.

“Christians who endure suffering and death for their faith in places like Iraq, Syria and Egypt, show us how to confront terrible evil with the weapons of love and truth. They are a brilliant witness to God's love and power,” Supreme Knight Anderson said. “Our support for these persecuted Christians has taken two forms. First, since 2014, we have provided more than $13 million for Christian refugees. Second, we advocate on their behalf in the hope that someday they may live their faith in peace — and live in their own communities not as second-class citizens, but as free and equal citizens.”
The supreme knight announced two new initiatives to assist Christians at Risk.
​On November 26, the Knights of Columbus and the United States Conference of Catholic Bishops will sponsor a day of prayer for persecuted Christians followed by a Week of Awareness and Education.

“I am pleased to announce that the Knights of Columbus is taking a concrete step to save Christianity in Iraq,” Supreme Knight Anderson said regarding the second new initiative. “The board of directors has authorized a new effort to raise $2 million to save a Christian town on the Nineveh Plain. The town the Knights of Columbus is saving in Karamdes. It is a town in Iraq that until recently was controlled by ISIS.​

The terrorists desecrated churches and graves and looted and destroyed homes. Now we will ensure that hundreds of Christian families driven from their homes will return. We will give them and many others hope for the future. For $2,000, a council, a parish or an individual can move a family back home.”
For more information on, or to contribute to, this initiative, please visit christiansatrisk.org.
“This year let us be in even greater ways who we are called to be as brother Knights,” he told the gathered Knights. “Let us strive to be that radiant and attractive witness of fraternal communion that our Church and our world so desperately need. Let us strive to be authentic witnesses of how to care for one another, and how to encourage and accompany one another. We can and we will do these things as the spiritual sons of Father McGivney. We can and we will do these things because we are convinced of God’s love and power.”