This page is dedicated for those members whose loved ones or themselves are in distress due to illness or death of a family member or friend.
This page will also list a recent passing of a brother Knight.
Links to Catholic webistes

On Sunday, May 17th, our brother knight, Dennis Bauer, left this world after a long battle with cancer. Please pray for him, his wife Carmella, and their entire family
At this time we have no details about his funeral or any memorial service.
Dennis served in the U.S. Coast Guard,
so he will be interred with full military honors.
We will keep you posted. Here is a letter from the San Diego Chapter President
____________________________________________
SAN DIEGO DIOCESE CHAPTER
​KNIGHTS OF COLUMBUS

Brothers, it is with great sadness that we hear about the death of Brother Knight Dennis Bauer of Valle De Oro Council 9332, after a long battle with cancer.

Dennis was a tireless worker for the Knights of Columbus for the past 15 years and had an impeccable wit.  He was a Brother Knight that you could always count on to be there with a smile.

Our prayers go out to his wife Carmen and his family that we hope will help comfort them during this time of sorrow.
Vivat Jesus,

Prayer for the Church

O Lord Jesus Christ, Supreme Pastor of Your church, we thank you for the ministry of Pope Francis and the selfless care with which he has led us as Successor of Peter, and your Vicar on earth.
Good Shepherd, who founded Your Church on the rock of Peter's faith and have never left Your flock untended; look with love upon us now, and sustain Your Church in faith, hope, and charity.
Grant, Lord Jesus, in Your boundless love for us, blessings on our Pope Francis and Your Church. May he  please You by his holiness and lead us faithfully to You, who are the same yesterday, today, and forever.  Amen 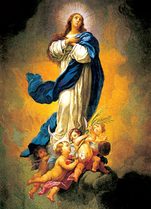 Most Holy Trinity,  we put the United States of America into the hands of Mary Immaculate
in order that she may present the country to you.
Through her we wish to thank you for the great resources of this land
and for the freedom which has been its heritage.
Through the intercession of Mary, have mercy on the Catholic Church in America.
Grant us peace. Have mercy on our president and on all the officers of our government.
Grant us a fruitful economy, born of justice and charity.
Have mercy on capital and industry and labor. Protect the family life of the nation.
​Guard the precious gift of many religious vocations.
Through the intercession of our Mother, have mercy on the sick, the tempted, sinners– on all who are in need.
Mary, Immaculate Virgin, our Mother, Patroness of our land, we praise you
and honor you and give ourselves to you. Protect us from every harm.
Pray for us, that acting always according to your will and the will of your Divine Son, we may live and die pleasing to God.  Amen.
Imprimatur: +Patrick O’Boyle, Archbishop of Washington, May 8, 1959.

PRAYER REQUESTS:
Weekly Rosary conducted by Knights 9332 members in Santa Sophia Church
Every Wednesday @ 6:30 pm
Come pray with us for the 5th Sunday/Family Rosary each month that has FIVE Sundays after the 8 am Mass (at 9 am)
All are invited to attend. Contact PGK Pat Esquibel for details: pesqui96@gmail.com

Gisela McGarry December 15, 1940 - June 3, 2016 Beloved wife of Br. Leo McGarry
Gisela McGarry
December 15, 1940-June 3, 2016
Gisela McGarry was born in the city of Kleve in Germany at the end of 1940. By the end of the World War II almost the entire city was leveled. She, her sister and mother began a life of extreme hardship and poverty. Gisela turned out to be a good student with a facility in languages. She studied in London and upon return got a job with the US Army in Frankfurt as a translator, where she and Leo met and eventually married.

The next assignment was in Portsmouth, VA where Leo was Liaison to the Navy and Gisela found a position as the librarian at the civilian nursing school and helped them successfully gain certification. She developed long lasting contacts and friendships. Leaving Portsmouth, Gisela and Leo went to San Antonio for 6 months and then he was assigned to Vietnam. Gisela returned to Germany to live with her mother in Kleve and to Frankfurt where she was hired again as a translator in the same office she had before being married.

Upon Leo's return from Vietnam, Gisela joined him and obtained her US Citizenship. Moving back to Germany they had four wonderful years there. Gisela began teaching German to American soldiers. She became quite proficient and Leo became "hey are you Gisela's husband." During their farewell party, Leo's Commanding General talked about Gisela's German classes significantly more than he did about Leo's work for him as a war planner. He then knew that the term "Gisela's Husband" was going to stick to him for many years.

They were sent to the University of Denver. Next, Leo was an assigned to Korea. While it was supposed to be an unaccompanied tour, Gisela was not going to miss out on that mystery and entertainment. She packed up and moved to Seoul where she worked for St. Luis High School. She was picked up and taken to different military installations every day. She had a ball encountering all the mysteries of the Orient (Asia) as well as meeting the young soldiers who were working to advance their education. She also became a "donut-dolly" at the last MASH hospital in the Army.

Next stop was back to Fort Sam Houston, where they picked up their son Patrick and transitioned to the Navy and Sigonella Sicily. They found a home on the beach and Gisela basked in the sand and sun. Gisela used her language skills and learned Italian over one summer. She was voted the permanent grammarian of the naval base's Toastmasters Club because her grammar was better than any of the Americans. Their next move brought them to Spring Valley and Santa Sophia Church in 1979, where Gisela got her Real Estate License. With a poor housing economy, she was glad to get out of the business. Leo found new employment in Phoenix AZ, which lead to Gisela spending the next few years burning up the highway between Phoenix and San Diego. She loved it so much here; she would drive back for any excuse. Finally Leo found permanent employment back in San Diego and they were able to return.

The next part of her life involved guiding German tourists throughout the West. She loved it and became quite an expert of many aspects of the South Western part of the USA.

In the last few years she had a number of medical problems, which she had to endure. While it was often difficult, she maintained her love of life and her commitment to God and her friends and colleagues.

Her death on June 3rd in Bordeaux was a tragic loss to her family and friends. Patrick commented that it would have been the way she would have wanted to go; traveling in first class accommodations on a magnificent ship in Europe. It seemed to be consistent with the second half of her life as a tour director and the first part of her adult life as the spouse of a soldier and sailor, traveling to the far corners of the world.

Requiescat in Pace.
Rest In Peace
Immortal God, Holy Lord, Father and Protector of all you have created, we raise our hearts to you today for those who have passed out of this mortal life.
In your loving mercy, Father of all, be pleased to receive them in your Heavenly company and forgive the failings and faults they may have done from human frailty.
We ask you this in the name of Jesus Christ our Lord, who suffered and died for us that we might live with Him in your sight forever, Amen
May the their souls and the souls of all the faithful departed rest in peace. Amen.
Courtesy of The Franciscan Missions.